A Bit of History

Grace Lutheran church was established on January 18th, 1859 under the name St. Peters Lutheran Church.  The original building was subsequently replaced with the current church in 1904.  On May 1, 1859, Immanuel Lutheran Church was established, just a short way south of Grace.  Then in 1870 the two churches united as a single parish while still maintaining their individual churches.  A parsonage was built on the site of St. Peters, and the single pastor continued to serve both churches until 1931 at which time they each had their own pastor.

In 1977 the congregation completed a major renovation of the parsonage.  The following year the steeple, bell tower, and bell all came down, waiting a year to be replaced.  In 1982, “Lutheran Worship” was introduced into the worship service.  In 1985 a new organ was added.  1989 brought the replacement of the old garage with a new one.

In 1991, with the help of eight Laborers For Christ and many members of our congregation, Grace moved its main entrance from the south side to the west side of the church, an addition which added much needed space for education and meeting rooms and storage.

It would seem that the Rev. Daniel Stecher, as the pastor to Trinity Lutheran in Sheboygan, was the first pastor to serve Immanuel and St. Peters as well up until 1870.  From then on, there was a long line of pastors to serve St. Peters and eventually Grace.   The more recent to serve Grace: 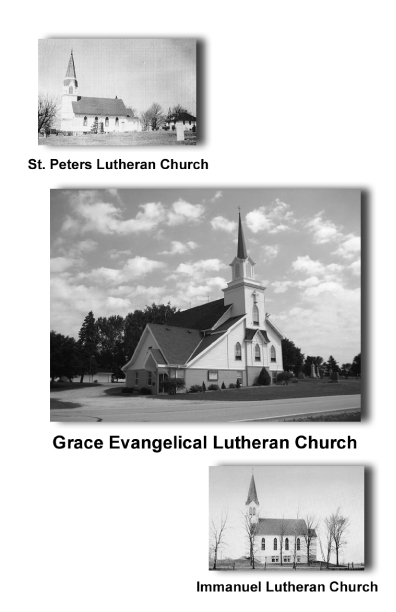